On 16 October 2013, during the TEN-T Days 2013, European Commissioner for Transport, Siim Kallas, signed an agreement towards funding support of EUR 11.3 million for a joint project called Twin-Ports, between the Port of Helsinki and the Port of Tallinn.

The Twin-Port project is part of the TEN-T (Trans-European Network) MoS (Motorways of the Seas) Multi-Annual 2012-2015 programme.

Minister of Economic Affairs and Communications of Estonia Juhan Parts stated that the sale of available AAU emission units and the subsequent founding of recharging infrastructure for electric cars is a bold an innovative step.

“This project aims at the future, which will prove if and when electric cars shall reach wide use by the public. In any case, multiplying the number of electric vehicles in Estonia and making energy use more efficient is a good start,” said the Minister.

The preparations at the Ministry of economic Affairs and Communications for developing a policy favouring the introduction of electric vehicles has been on the way since the second half of 2009. This process has taken careful account of the policymaking and technological advances in other countries around the world.

The European Union set a clear direction in the field of efficient modes of transport for the electric and hybrid-driven vehicles. Estonia has taken the obligation to reach a level of 10% in the use of renewable sources of energy in transport sector by 2020. Enterprise Estonia has been supporting the creation of an electromobility cluster through its programmes.

The Estonian government decided today that the proceeds from the sale of 10 million AAU emission units to the Japanese Mitsubishi Corporation will be used to buy 500 electric cars. The remainder will be used to create a nationwide network of rapid recharge points and incentives aimed for private persons.

On 9-10 February 2010, Tallinn hosted The II International Rail Forum known as “1520”, where the future trends of the regional rail business and transit trade were discussed. The Forum “Strategic Partnership 1520: The Baltic Sea Region” was a landmark event for the Estonian transit trade. One of the most outstanding speakers at the event was Mr. Vladimir Yakunin, president of Russian Railways, a state owned company of our Eastern neighbours, who incidentally was also one of the main initiators and conveners of the forum.

The participants hailed from post-Soviet states as well as from Finland and other countries where the broad-gauge track of 1520 mm is used (the name of the forum derives from this measurement). In addition to the rail operators, the participants included cargo owners, forwarding agents, terminal operators etc. The significance of the forum to the Estonian transit sector and economy in general was highlighted by the fact that the event was opened by Mr. Toomas Hendrik Ilves, President of the Republic of Estonia and for example Mr. Juhan Parts, Estonian Minister of Economic Affairs and Communications as well as Mr. Edgar Savisaar, Mayor of Tallinn were among the attendees. Port of Tallinn was one of the major sponsors of the forum.

On 4 March 2010, the delegation of Lianyungang Port Group Ltd and Shipping China under the leadership of the Chairman of the Lianyungang Port Group Ltd visited Port of Tallinn. It was a third meeting between the same parties with the objective of establishing an alternative rail freight forwarding route for cargo containers between China and Europe (so-called Land Bridge). 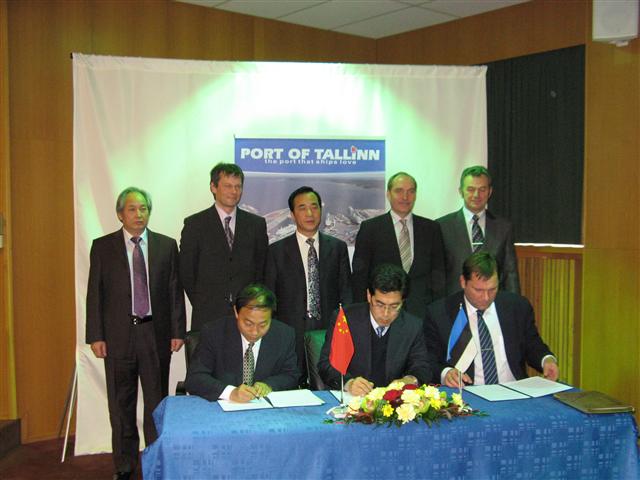 The joint venture between Lianyungang Port and China Shipping Container Lines, which CEO was also a member of the delegation, has already launched a container train on the route between Lianyungang and Kazakhstan. Presumably in April, the cargo train route to Moscow will be opened. Considering that the only regular container train service from the Baltic States and Finland to Moscow is operated on the route between Port of Tallinn and Moscow, the chaining of transport corridors would present an opportunity to establish a unique rail connection between Lianyungang Port and Port of Tallinn, which would secure its own niche in the intercontinental transportation of time sensitive freight. Taking into consideration the difference in the delivery times in maritime cargo transport and rail freight forwarding, the estimated time saved when opting for Land Bridge in cargo transport for example on the route between any South-Korean port of departure and any Western European port of destination would be approximately 23 days, which is almost half of the duration of maritime cargo transport on the same route.

The enterprises attending the meeting (in addition to Port of Tallinn, EVR Cargo, Muuga CT from Estonia; CF&S, representing China Shipping in Estonia, and Petromaks Spediitori AS, representing Transkonteiner in Estonia) agreed to set up a joint task force for launching the Land Bridge and the ports and Shipping China signed a co-operation memorandum for the development of an electronic land bridge between Asia and Europe.

Seatrade Cruise Shipping Convention has been an annual event since 1984. This year the CSM attracted over 11,000 attendees. Port of Tallinn was represented with a display in the joint exhibit of Cruise Europe, the marketing organisation of European Cruise Ports.

The 2011 cultural events in Tallinn generated a lot of interest. The Enterprise Estonia representation and the relevant brochures of the Tallinn 2011 Foundation proved to be most helpful.

During the CSM week, the Dream World Cruise Destinations Magazine recognised Tallinn with Best Destination Experience (Independent) award – in other words Tallinn was acknowledged as the best destination for independent sightseeing – “destination where the quality of the experience derives from passengers making their own arrangements for their time ashore”; the destination is selected by the representatives of major cruise lines based on the feedback received from their passengers. Such information is important for the end customer, who deems the destination convenience and security to be important in independent travel. In any case, this is a great recognition for Tallinn and also for the Port of Tallinn.

In European Union countries are forbidden a list of ships. You can view this list in PDF file. Read more…

Estonian Transit Industry celebrated its 760th Anniversary year ago. Early Estonian history, the emergence and development of medieval towns was based on geographical advantages and the transit trade. The use of the trading route through the Gulf of Finland livened up during 9th–10th centuries. Port of Tallinn was first mentioned in written in 1154.

On 15 May 1248, the Danish King Erik IV bestowed Lübeck Rights on Tallinn, with which Tallinn was merged into the joint legal sphere of German trading towns. This date is considered as a start of organized transit trade in Estonia, and is celebrated as TRANSESTONIA’s anniversary. In the end of the thirteenth century Tallinn joined the Hanseatic League and over the next couple of hundred years it played an important role in the relations of the Hanseatic League with Russian, especially Novgorod tradesmen.

The subject of the confece TRANSESTONIA 2009 is going to be The Crisis Plan. Conference brings together numerous enterpreneurs, Government officials and members of the Estonian Parlament (Riigikogu). High level forum of the Conference will work seriously on finding the best start for the new rise. Conference languages are Estonian and Russian with simultaneous translation.

Ministry of Economic Affairs and Communications announced that by May in next year new maritime action plan will be published and taken under consideration.

There will be different parts making this plan which especially owners of Estonian harbours have been waited for. There will be four working groups: transport and ports, public services, maritime survey and education work group and tourism.